5 Star Non-Shifting Hajj packages 2021 are the specialty of Hijaz Travels Ltd. We also offer various other Hajj and Umrah Packages from the UK. We have built our reputation as a tried and trusted 5 Star non-shifting Hajj package 2021  service provider over the last few years helping thousands realise their dreams of a serene pilgrimage.

Brothers and sisters who have performed Hajj are fortunate enough for being the guests of Allah (SWT). If you are planning to perform Hajj in 2021 and want to be among those fortunate brothers and sisters, feel free to choose our Hajj packages 2021. We are a Ministry of Hajj and Umrah approved agent and  Our Hajj packages 2021 are ATOL and IATA protected. We are also an LHO and ICO approved agent. We aim to fulfill all your needs and make your journey the most memorable experience. So, don't delay and get your lifetime journey booked now with Hijaz Travel Ltd, the 5 Star non-shifting Hajj Packages 2021 provider from the UK.

Thanks & Appreciation for Successful Hajj Season 2017

Thanks & Appreciation for Successful Umrah Season 2018

Preparing for the Hajj 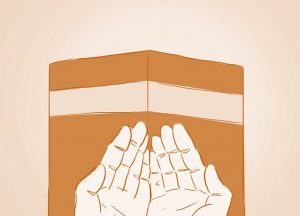 1 Be sure you are ready to perform the Hajj

The Hajj is not to be undertaken lightly or as an afterthought. In ancient times, it was not uncommon for pilgrims to die during their journey to Mecca. Though modern conveniences now allow millions of Muslims to quickly and safely travel to and from the holy city, the Hajj package 2021  should still be approached with the seriousness and dedication of these early pilgrims. Study the rituals of the Hajj, begin to clear your mind of worldly distractions, and, most importantly, be repentant for past sins, which will be forgiven during your pilgrimage. 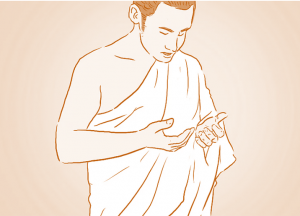 2 Decide which type of Hajj you will undertake

Muslims have three different options when it comes to performing the Hajj. Each offers a slightly different experience in terms of the rituals performed and the timeline of events on the pilgrimage. The three types of pilgrimage are: 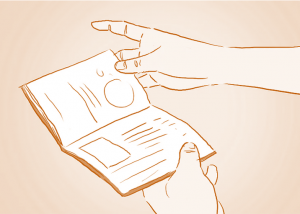 3 Plan your trip to Saudi Arabia.

The Hajj takes place in and around the holy city of Mecca, which today islocated in the country of Saudi Arabia. As when traveling to any foreign country, you will want to have your passports, travel documents, tickets, and so forth sorted out well in advance. Keep in mind that national governments can sometimes be slow to issue new passports when old ones expire. 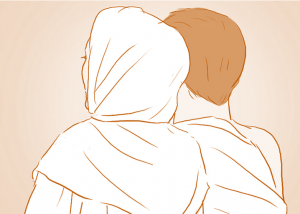 4 Prepare to be immersed in religion.

All women performing the Hajj should plan to travel in the company of a mahram - any related man, such as her father, brother, husband, son, or an approved individual according to Islamic law . Women over 45 can perform the Hajj without a Mahram if they are part of a large group and have a notarized letter of consent from their husband.

Performing the Rites of Umrah 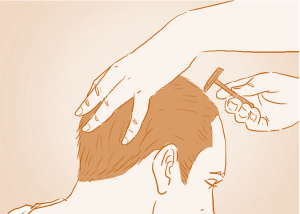 Ihram is a holy state of purity that all Muslims must assume before performing the rites of Umrah and Hajj and which must be maintained for the duration of the rituals. Ihram requires certain physical actions and behavioral changes, but don't be mistaken - the real state of purity is attained spiritually by proclaiming one's intention to sincerely pursue the Umrah/Hajj and by reciting the Talbiyah prayer. 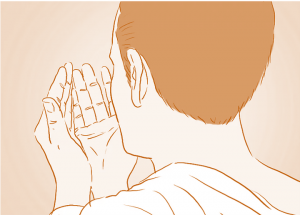 2 Declare your intention and say the Talbiyah.

A special boundary called a Miqat surrounds the holy sites of the Hajj. Pilgrims cannot cross this boundary without having attained the pure state of Ihram. When a pilgrim in the state of Ihram approaches the Miqat at one of six historical entry points, he pronounces the Niyyah - a short recitation of his intention to complete the Umrah. 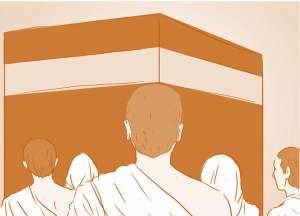 3 Proceed towards the Ka'bah - the most sacred location in Islam.

At first sight of the Ka'bah, keep your eyes fixed on it and stand to the side of the crowd as you say "Allahu Akbar" ("God is Great") three times, followed by saying "La Ilaha Illallah" ("There is no god but God"). Recite other holy verses if you desire. Say a blessing for the Prophet Muhammad (peace be upon him) and, in total humility, make your prayers to Allah. This is an especially propitious, auspicious time to pray for something. 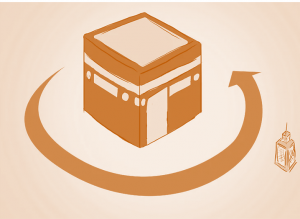 Tawaf is a ritual where Muslims circle the Ka'bah. To begin, men should make sure their Ihram garb is properly arranged - make sure the upper sheet passes under the right arm and lays across the left shoulder, exposing the right shoulder. Next, all should face the Ka'bah so that the Black Stone is on your right. Make another Niyyah for Umrah, saying: Allah huma inee 'ureedul 'umrata fa yasir haa lee wata qabal haa min nee (O Allah, I perform Tawaf of Umrah to please You. Make it easy for me and accept it from me). 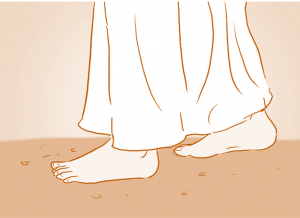 Sa'ey means "seeking" or "ritual walking". In practical terms, it means walking back and forth seven times between the hills of Safa and Marwah which are to the south and north of the Ka'bah, respectively. Originally, this was done outdoors, but today, the entire path is enclosed in a long gallery. 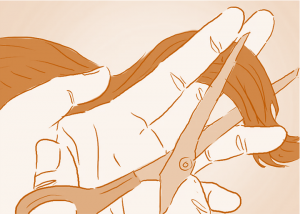 6 Have your hair shaved or clipped.

After completing the Sa'ey, men should have their hair either completely shaved or cut short - both are permissible, though shaving is preferred. However, a man may not want to have his head shaved completely during the Umrah if he plans to complete the Hajj rites in the next few days, which also include shaving. Women should not have their heads shaved but instead may cut a lock of hair or have their hair trimmed several inches. 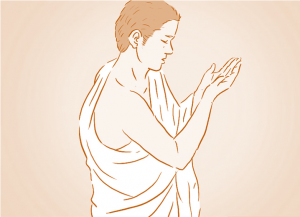 1 Re-assume Ihram and declare your intention to perform Hajj.

Depending upon how the trip is scheduled, most pilgrims performing the Tamattu' pilgrimage have a several-day break in between their Umrah duties and their Hajj duties, so, for sake of ease, they leave the state of Ihram after their Umrah. However, as with Umrah, the Hajj requires ritual purity and meekness before God, so, at the outset of the Hajj, pilgrims re-assume the state of Ihram. As before, bathe, groom yourself, and don the proper Ihram clothes. When you're ready, say another Niyyah: Allahuma in nee u-reedul hajja fayassir hu lee wata qabal hu min nee (O Allah! I intend to perform Hajj. Please make it easy for me and accept it from me). After, say the Talbiyah three times. 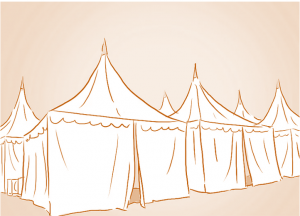 On the first day of Hajj, pilgrims head to Mina, a town near Mecca, where they spend the rest of the day. Here, the Saudi government provides amenities - thousands upon thousands of white air-conditioned tents provide temporary housing for each year's pilgrims. On the first night, no major rituals take place, so you may spend your time praying and reflecting with other pilgrims if you wish. Many pilgrims choose to say the Dhuhr, Asr, Magrib, Isha and Fajr prayers. 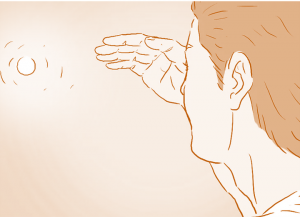 3 Head to Arafat and perform Waquf.

On the second day of Hajj, pilgrims travel to Arafat, a nearby mountain. Pilgrims must reach Arafat by the afternoon, because, at this time, a ritual called Waquf begins. From the time when the sun first starts to decline until the time it sets completely, pilgrims hold a vigil on a plain of Arafat during which time they pray and reflect. 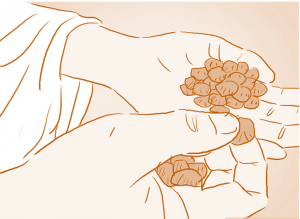 After sundown, pilgrims head to a place called Muzdalifah between Mina and Arafat. Here, they offer an evening prayer to God (Maghrib) and spend the night sleeping on the ground beneath the open sky. 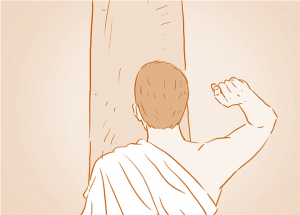 Before the sun rises, pilgrims head back to Mina. Here, pilgrims participate in a ceremony meant to symbolize stoning the devil. Pilgrims throw seven consecutive pebbles at a special stone monument called the Jamrat al Aqabah. 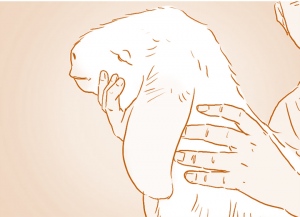 After the Ramy ceremony, it's necessary to offer an animal sacrifice (Qurbani) to God. In the past, each pilgrim did this individually; however, today, it's much more common for pilgrims to simply purchase a sacrifice voucher. These vouchers signify that an animal was sacrificed in your name. After selling vouchers, qualified personnel will sacrifice a lamb for each pilgrim (or a camel for every seven pilgrims), butcher the animals, package the meat, and ship it to Muslim communities all over the world to be used to feed the poor. 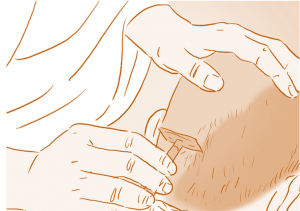 7 Get your hair cut or shaved. 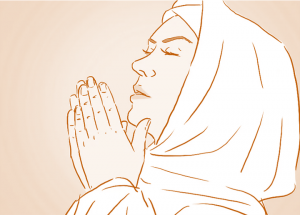 8 Perform the Tawaf and Sa'ey.

Just as in the Umrah, the Hajj requires pilgrims to perform the Tawaf and Sa'ey rituals at the Ka'bah and the nearby hills. The rituals are performed essentially identically to how they are performed during the Umrah, but it is highly recommended that these ceremonies be done only after the stoning, sacrifice, and hair-cutting rituals. 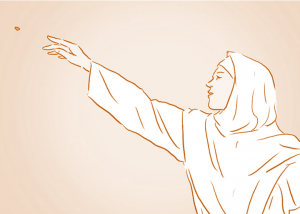 9 Repeat Ramy after sundown on the fourth and fifth days.

In Mina, you must once again participate in the stoning ritual. This time, you will not throw pebbles only at the Jamrat al Aqabah, but also at two other monuments - the Jamrat Oolah (the first jamrat) and Jamrat Wustah (middle jamrat). 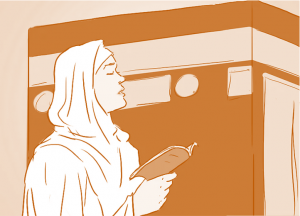 Finally, your Hajj has come to a close. When you've finished your Hajj, complete any unfinished business you have remaining in or around Mecca first, such as shopping or meeting any friends or family. If you are planning to stay in Mecca for a few days after Hajj, then you must wait until the very end of your stay before you perform Farewell Tawaf and depart Mecca. The Farewell Tawaf is the final tawaf, walking around the Ka'bah seven times as before. As you perform the Farewell Tawaf, reflect on the thoughts and feelings you've experienced on your Hajj and how fortunate you have been to be selected by Allah Almighty to come to His House. Offer praise and supplication to Allah. When you've finished, you should immediately proceed to gather your belongings and luggage and depart for your home. If you need to buy food for your return trip, you are allowed to do that in sha Allah, since that is not the same as shopping and is related to the return trip.